Reflecting on the Season..

It’s that time of year again… that beautiful, special time of year where we all gather around to celebrate what truly matters… Mario Kart. 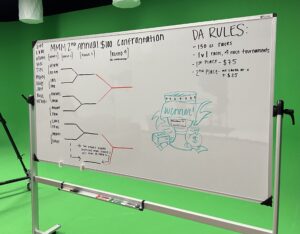 The 2nd Annual MMM Mario Kart $100 Confrontation went DOWN earlier this month! After last year’s close finish, this year’s Confrontation was highly anticipated and extremely competitive. With twice as many races and racers as last year, tensions were high. The skill level of competitors ranged from total newbies to seasoned veterans, making for a truly entertaining event.

Who won, you ask? Before someone won the 2nd Annual MMM Mario Kart $100 Confrontation, we all won one of our very own MMM awards. Throughout the past two years or so, various MMM employees have been bestowed a range of awards. Mike took time this year to give everyone an award, fit just for them. Awards ranged from “Social Influencer of the Year” for our social media manager, and “Longest Commute to Work of 2022  Award” to our newest addition, Ian Ramprashad, before he moved to St. Louis. Thank you Mike, for making sure we all are recognized and appreciated. 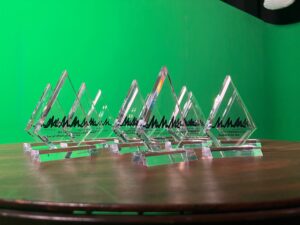 This year’s confrontation started off strong, with twelve total racers. But in the end, there could only be one winner.. Some stand out games included Josh vs. Rachel (she claims to be helpless but she absolutely held her own), as well as Nicole vs. Tom — the reigning champ versus Rachel’s wife. “She’s great, but usually on Nintendo 64” Rachel said of Nicole. Tom didn’t hold back, but Nicole managed to pull out a win. Tom won that round but Nicole qualified for a position in Round 3. In Round 2 we saw Adam and Zoë face off in a heated and very close race that ended up going to Adam — before he had to leave for the night, reallocating his MMMario Kart Confrontation ranking to the loser of the race after his. No mercy for Zoë. Somehow the races of Josh vs. Paul were some of the most intense races of the night! Paul pulled ahead, giving Josh what was Adam’s position.

Round 3 was between Josh vs. Tom and Nicole vs. Paul. In a desperate fight to the finish, Round 4 was left to the two domineering players of the day, Tom and Paul.  The Final Confrontation was the most intense tournament of the night despite the dwindling number of attendees. Every move mattered, every

trick and turn could make or break the racer’s race. Lo and behold, the MMMember that claimed the first place prize this year was Tom Young, for the second year in a row! The $100 advertised for this Confrontation was divided into $75 for first place (Tom) and $25 for second place (Paul).

We are so grateful to all of our talented participants for making this year another smashing success.

Who will win next year’s Confrontation? Will Tom be dethroned? When is this event usually held??? Stay tuned to find out.